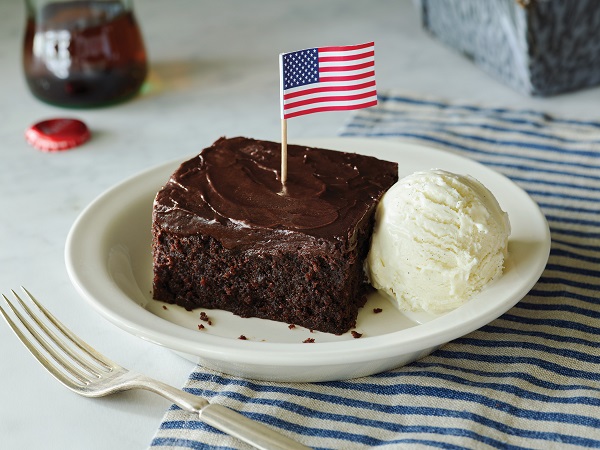 This Veterans Day, Cracker Barrel Old Country Store® will thank the men and women who have served our country by offering military veterans a complimentary slice of its Double Chocolate Fudge Coca-Cola® Cake. Cracker Barrel is also encouraging guests to support Operation Homefront through a giving campaign that will contribute to the national military nonprofit’s mission to build strong, stable and secure military families.

Cracker Barrel® has long supported military service members, veterans and their families. This year, Cracker Barrel will once again offer veterans a complimentary piece of Double Chocolate Fudge Coca-Cola® Cake for dessert on Nov. 11 at all 641 Cracker Barrel Old Country Store locations to thank them for their service and sacrifice.

“Cracker Barrel has been connecting families around the dinner table for over 47 years,” said Cracker Barrel Old Country Store Manager of Corporate Citizenship Sloane Lucas. “We believe in the importance of strengthening family bonds and supporting organizations like Operation Homefront that keep those family bonds strong among those who serve or have served in our armed forces. This Veterans Day, we’re honored to give back to these brave men and women and invite all of our guests to join with us in showing appreciation for those who have served our country.”

"The support that Cracker Barrel and its guests provide to our men and women in uniform is tremendous," said Operation Homefront Senior Director of Corporate and Foundation Partnerships Jill Eskin-Smith. "We are grateful that Cracker Barrel shares in our commitment to deliver assistance to service members and their families on Veterans Day and throughout the year.”

By supporting the families of those serving in America’s armed forces, Cracker Barrel believes it can make a deeper, more meaningful and lasting impact. Over the years, the company has supported several military-focused nonprofits and charitable initiatives, including the National Military Family Association, Children of Fallen Patriots Foundation, United Through Reading, and the National Museum of the United States Army. Most recently, Cracker Barrel donated over 700 rockers to Operation Homefront in support of its many programs, including “Homes on the Homefront” that helps our nation’s heroes realize the American dream by placing deserving veterans and their families in mortgage-free homes.