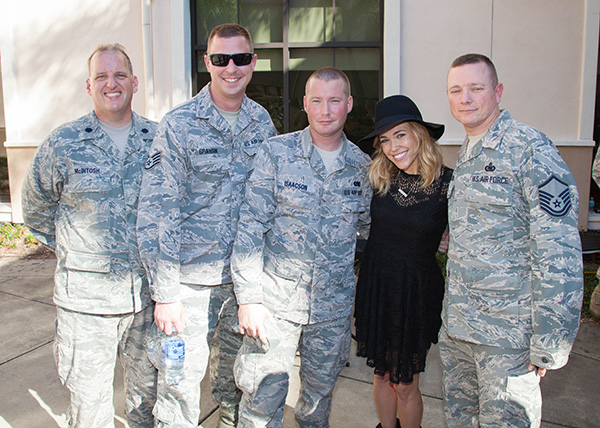 The "Fight Song" singer began her base visit at General Clarence Tinker Elementary School, where she surprised children of deployed active military parents with toys from Cracker Barrel® for an early holiday celebration. She also received a demonstration from the Military Working Dogs (MWD) unit.

"It's been a very special and powerful experience spending time with these families who really embody such positive ideals and are always lifting each other up. These servicemen and women work so hard for all of us, and I'm so humbled to be here giving back with Cracker Barrel in a small way with my music,” said Platten.

At the base’s medical clinic, Platten performed her two hit singles, “Fight Song” and “Stand By You,” from her upcoming third studio album “Wildfire,” which releases on Jan. 1. She ended her visit by spending time meeting the airmen and their families, where she brought holiday cheer by surprising them with Cracker Barrel Old Country Store® gift cards.

We are honored to have partnered with Rachel to surprise these soldiers and their families and extend a little of our Cracker Barrel hospitality by providing some toys from our retail store,” said Senior Marketing Manager Julie Ulmer. "Cracker Barrel has a rich history of supporting organizations that lift up our servicemen, servicewomen and veterans. It’s fitting that this surprise visit was designed to provide a fun environment for soldiers and their families at the base in order to connect and strengthen their family bonds because for the past 46 years Cracker Barrel has been proudly connecting families around the dinner table.”

Following the highly acclaimed success of the self-titled “Pentatonix” album, which scored the number one spot on the Billboard 200 chart with help from incremental sales at Cracker Barrel, Platten will be the second artist to release her album as part of the Cracker Barrel Old Country Store Spotlight Music program this January.

About Rachel Platten
Born and raised in Boston, Rachel Platten has been an independent musician for the better part of the last decade, fighting for her big break in music. This past year, the singer/songwriter's “Fight Song” would be just the break she hoped for, becoming the life-changing inspirational hit of 2015, topping charts around the world and selling more than 3 million downloads in the U.S. alone. The fire that “Fight Song” ignited has connected not only with music fans but also Columbia Records. With her anthemic new single "Stand By You" climbing the charts, Rachel kicks off the new year with the release of her major label debut album "Wildfire," available everywhere January 1.